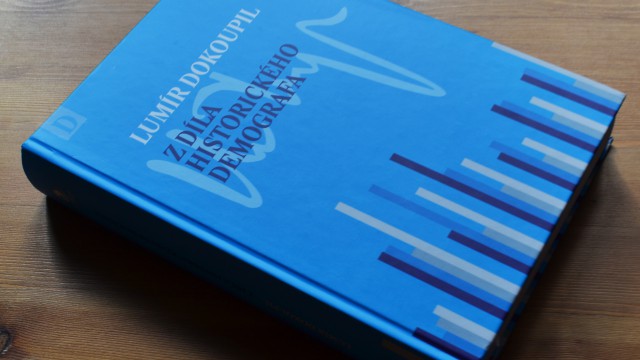 The book we are submitting to a wider group of readers offers older studies by a renowned Czech historian Lumír Dokoupil and it maps his contribution to the fi eld of historical demography. These older studies are not easily accessible at present. They were not preserved in an electronic form and some of them have not been published at all, e.g. two research reports from the 1970s which were written for a project solved by the Pedagogical Faculty in Ostrava and the Silesian Institute of the Czech Academy of Sciences in Opava. Despite the fact that some analyses were later published in magazines and in collection of works, this research has never been published in a coherent form. Other studies were selected with the aim to complement Dokoupil’s fundamental contribution towards historical demography prior to 1989 and slightly beyond. The articles were published in various Czech, Slovak and Polish magazines and collections of work and also translated into foreign languages in Historická demografi e (Historical Demography). The texts were translated back into the Czech language knowing that these translations will not be an ideal version of the studies and they will not compensate for the author’s personal style of writing. Since the studies were collected in one monograph, this enabled to quickly compare individual fi ndings which are still valid in many respects.

Two reminiscences of Lumír Dokoupil and of the co-operation with him open the book. Their authors are his close colleagues Prof. Eduard Maur and Doc. Ludmila Nesládková. Historical demography in Czechoslovakia was constituted as an independent fi eld on the border of history and demography and it was based upon Henry’s methods in the 1960s when two research centres were established in Prague and Ostrava. Eduard Maur lead the research in Prague and he closely co-operated with the Ostrava centre whose central fi gure Lumír Dokoupil was and who was soon accompanied by the student and later also the long-term colleague Ludmila Čermáková – Nesládková. Therefore, the reminiscences were composed by his closest co-workers, colleagues and friends.

An interview by Martin Jemelka, professor Dokoupil’s former student, with Lumír Dokoupil is placed in front of the studies. Its character is mostly biographical, the questions are directed towards his childhood in Hrabová, his experience from the Second World War, university studies in Olomouc, infl uence from professor Ladislav Hosák, teaching practice in the Hlučín region and his move to the Pedagogical Institute in Ostrava. Private and work-related reminiscences, mainly those focused at his orientation towards historical demography, intertwine here. A lot of diploma works aimed at historical demography were written under Dokoupil’s guidance at the Pedagogical Institute and later at the Pedagogical Faculty between the 1960s and 1980s. He himself conducted numerous excerpts and analyses. In the 1990s, Lumír Dokoupil stood at the birth of Biografi cký slovník Slezska a severní Moravy (Biographical Dictionary of Silesia and North Moravia) and he has been its executive editor to this date. He succeeded in publishing 24 volumes of this biographical work in two series and he edits its supplements even nowadays. The interview by Martin Jemelka with professor Dokoupil is closed with photographs which provide iconographic documents about Dokoupil’s life.

In this publication, the studies are divided into thematic blocks and these blocks can overlap in various issues. The fi rst block is called the Demography of the Ostrava Industrial Area before the First World War. So far unpublished research can be found here since it focuses mostly at the population development of the Ostrava industrial area at the turn of the 19th and the 20th century, i.e. at the era of the most rapid industrialisation, which was a key research topic for the Ostrava centre of historical research lead by Milan Myška. The historical and demographic research focused at using data which had been processed by Austrian statisticians, at excerpts from modern censuses until 1910 and church registers from the same time. When obtaining the data from the registers, Lumír Dokoupil and his colleagues strived mostly for research into a more distant past which was connected with the genesis of industrial areas, however, the gist of the studies is at the era prior to the First World War. A methodological study published in 1975 in the Slovak collection of works Forum metricum Slovacum opens the chapter. This is followed by an extensive study on the development of numbers of inhabitants in the Upper Silesian industrial area (Zabrze, Katowice, Bytom, Tarnowskie Góry) and then by the above mentioned research reports observing development of the natural change and composition of population in the Ostrava industrial area.

The second block under the title Population Development in the Ostrava Industrial Area (mostly) until 1879 contains studies which focused at the genesis of the industrial area and in which Lumír Dokoupil attempted to understand the demographic picture of the Ostrava region prior to the onset of industrialisation. He excerpted church registers mostly between the Josephine reforms and 1870, he used various topographic works to fi nd numbers of inhabitants and he paid a thorough attention to an important phenomenon which affected the whole area – the great famine crisis of 1848 – 1855. He published an article on this topic in the Sborník prací Pedagogické fakulty (Collection of Works from the Pedagogical Faculty in Ostrava) which opens the whole block. This is followed by analyses of population of Moravian Ostrava, Vítkovice and the wider industrial area including its hinterland. Towards the end of the block, Dokoupil’s key study Obyvatelstvo ostravské průmyslové oblasti do sčítání 1869 (Inhabitants of the Ostrava Industrial Area before the Census of 1869) is placed. This study was published in the series Spisy Pedagogické fakulty v Ostravě, vol. 57, 1986 (Writings of the Pedagogical Faculty in Ostrava). The study considerably enlarged the fi rst monograph entitled Demografi cký vývoj ostravské aglomerace (Demograpic Development of the Ostrava Agglomeration) which was published in Spisy Pedagogické fakulty v Ostravě, vol. 6, 1967 and which in its way concluded Dokoupil’s long-term research of the population of the wider Ostrava region prior to 1869. It was complemented with two specifi c studies which researched the issue of ageing population and social structure in the Ostrava industrial area.

The last block entitled the Population Development in Wider Territorial Units and in Older Periods is an interesting indicator of a certain diffusion of Dokoupil’s historical and demographic interests into a wider territorial sphere and into a more distant past. Despite the fact that the research team focused on research until the 19th century, soon they tried to research the period of the 16th to the 18th century which Louis Henry, founder of main research methods for historical demography, described as a protostatistic era. It was important for Henry, that this era compensated for the lack of statistical resources by using church registers which can be processed statistically although they were not created for this purpose. Although a dynamic division of the region into a progressive part and the part lacking behind was not applicable in traditional societies of the 16th – 18th century, Lumír Dokoupil together with his female colleague Ludmila Nesládková outspread the research also into the territory of the whole of North Moravia. This later lead into a co-operation with forefront representatives of the Prague centre for historical demography Ludmila Fialová and Eduard Maur and into a joint authorship of the book entitled Přirozená měna obyvatelstva českých zemí v 17. a 18. století (Natural Change in the Population of the Czech Lands in the 17th and 18th Century) which was published in 1999. This book can be easily accessible but it was not incorporated into the edition whose aim was to show a lengthy journey towards this outcome. Also studies about the evolution of the natural change in the population of North and North-Eastern Moravia were included into the chapter and development of mortality including the specifi c categories of child mortality was highlighted.

The edition of selected works by Prof. Lumír Dokoupil was prepared by his students and colleagues to express their gratitude on the occasion of his 80th birthday.